In August 2015, Habanos S.A. announced the cigars it would be releasing for 2016. Included in this list were two La Casa del Habano store exclusives, the Hoyo de Monterrey Elegantes and the Punch Punch 48.

In 2004, Habanos S.A. released the first in what would eventually become a regular occurrence, exclusives for the Habanos-licensed La Casa del Habano retailer. These releases are only sold to La Casa del Habano stores around the world and are usually limited to one or two different cigars per year. When the program started, the cigars were just different vitolas produced in unlimited quantities, but since 2011, the policy has shifted to each release being a limited production. 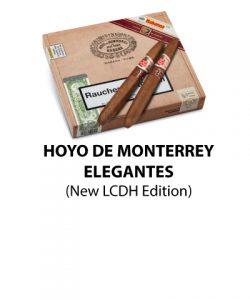 The Hoyo de Monterrey Elegantes is covered in a cinnamon brown wrapper that features a bit of tooth as well as a significant amount of oil. The cigar is quite spongy when squeezed, and there are multiple veins running up and down the length. Aroma from the wrapper is a combination of strong barnyard, manure, grass, cedar and leather, while the cold draw brings flavors of creamy oak, almonds, cinnamon, leather and a touch of citrus.

Starting out the first third, the Hoyo de Monterrey Elegantes features a dominant creamy cedar note, interspersed with other flavors of buttery popcorn, leather, barnyard, hay and cinnamon. There is some very nice caramel sweetness on the retrohale which combines nicely with the white pepper that is also present, although neither are very strong at this point in the cigar. The draw is a bit tight at first, which is to be expected in a vitola like this, but it opens up nicely after a few puffs, and the burn is trouble free so far. The overall strength is quite low, but is rising as the first third ends.

The second third of the Hoyo de Monterrey Elegantes sees the dominant note shift from the creamy cedar to more of a creamy leather flavor, followed closely by notes of cinnamon, wood, dark chocolate, espresso, hay and a touch of salt on the lips. The caramel sweetness is still very obvious on the retrohale, as is the white pepper, and both have actually increase slightly in strength as well. Construction-wise, the burn and the draw are giving me no issues whatsoever, and the strength has increased to a point very close to medium by the end of the second third.

While the leather note is still a major flavor in the profile during the final third of the Hoyo de Monterrey Elegantes, the dominant flavor has shifted once again, this time to a distinct creamy hay note. Other flavors of cedar, dark chocolate, barnyard, espresso beans, and cinnamon flit in and out, and both the caramel sweetness and white pepper continue to be players on the retrohale.

Q & A About Cigar Smoking